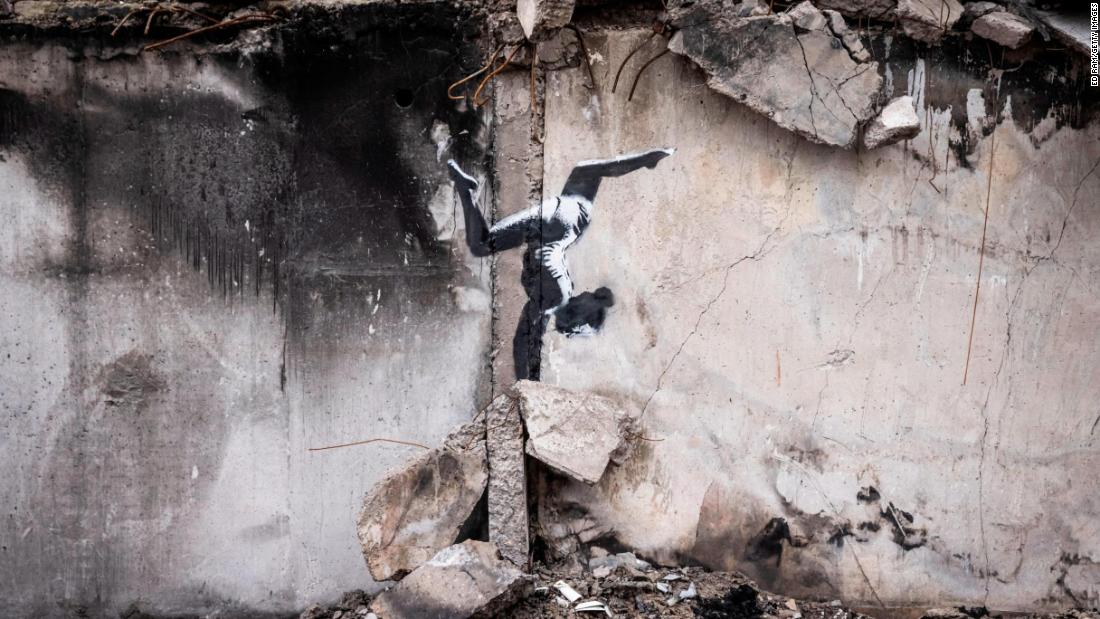 Renowned street artist Banksy has unveiled his latest artwork in an Instagram post — a mural in the liberated Ukrainian town of Borodianka.

The artwork shows a female gymnast balancing on a pile of rubble on the side of a building damaged by Russian strikes.

The graffiti artist posted three images of the piece Friday on social media, with a simple caption reading “Borodyanka, Ukraine,” using an alternative spelling for the town’s name.

Speculation had been mounting that Banksy was in the war-torn country after a series of murals appeared in Borodianka, located about 35 miles northwest of the capital, Kyiv.

Borodianka was hit particularly hard by Russian airstrikes in the first few weeks of the conflict. Credit: Ed Ram/Getty Images

One artwork, not officially claimed by the artist, depicted a man being flipped during a judo match with a little boy.

Another showed two children using a metal tank trap as a seesaw.

Borodianka was hit particularly hard by Russian airstrikes at the start of the invasion of Ukraine in February, with many buildings reduced to piles of rubble by long-range attacks.

It was home to 13,000 people before the war, but most fled after Russia’s invasion. What was left of Borodianka, after intense shelling and devastating strikes, was then occupied by Russian forces, who moved in on February 28.

A mural not officially claimed by Banksy shows a man being flipped during a judo match with a boy. Credit: Ed Ram/Getty Images

The town came back into Ukrainian control on April 1, and returning residents found their houses ransacked and shops pillaged with windows broken and contents stolen.

The letter “V” — a symbol used by Russia’s Eastern Military district in concert with the letter “Z,” an emblem for Moscow’s so-called “special military operation” — was found painted on buildings, vehicles and checkpoints.

The town has since been the focus of reconstruction efforts, with several tower blocks demolished as a result of damage caused by the fighting.